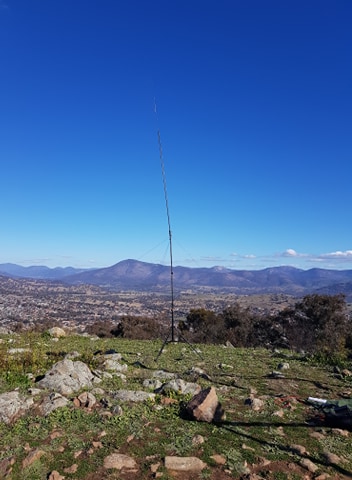 Today, I activated Tuggeranong Hill (VK1/AC-038) again. Unfortunately, I was late leaving home, and the walk up took *much* longer than I expected, likely because of the staying inside with Covid (That’s my story, and I am sticking to it), so I sadly missed the activation time that I had advertised, making it a bit of a tricky activation.

Today, I took my FT-817, an SG LABS 23cm transverter, and a Buddipole. Nothing too remarkable. Eventually I got gear setup at about 12.10 local time.

Weather was to die for – No wind at all, and surface temps of 15 odd degrees, making for a very pleasant time up on the hill. That, coupled with the extensive blood flow within my body (something something, it thought I would die from the stroll up the hill) kept me sooo toasty warm 🙂

I started by pulling out the SG Labs 1296 transverter, to see If I could contact VK1AD on Mt Tumorrama, but sadly it appears as though he had packed up. I could hear the VK1 1296 beacon S30+, so I am confident now that the 1296 gear receives beautifully 🙂 and I understdna the frequency translation rules. Wow, our VK1 beacon emits the weirdest signal, kind of a varying slow warble tone, but thats for another post.

I think i should work out better mounting arrangements for the transverter and antenna. I had it sitting on the base of the Buddipole Tripod, and didn’t take a photo. I like Andrews idea of the tripod with exchangeable camera mounts, so I think I will find an appropriate eBait supplier. Watch this space.

While trying 1296, I put out a number of calls on 146.5, but the frequency was silent, so I was confident that the Mountain Goats had completed their activation and were heading home to a cold beer and the mid-day movie on SBS.

Next, I set up the Buddipole, and configured it as a 40m vertical at about 8 feet with 4 radials. As often happens, I had a small issue with the Buddipole banana plugs being loose, but a quick touch up with my knife opened them up to make them nice and firm. Once everything was ready, I turned on 40M and there was activity!

My first contact was with Chris (VK2SR) who was mobile, running 400w into a mobile antenna on his 4wd. He was extremely active calling and chatting with stations all over Australia during his drive. Then I moved up the band a little to 7.095 to find other SOTA people. After a while, I found John VK1FJMG, who was working another ACT summit (Mt Ainslie – VK1/AC-040). It didn’t take long to qualify the summit, even though I was worried that everybody had gone home.

After I finished on 7Mhz, I tried 14Mhz, and the bands were not as open as I would have hoped – lots of activity at the noise limit of my hearing. So I packed up and strolled back down the hill.

While it would have been awesome to prove the 1296 gear, that will have to happen another time. I also need to increase my summit activation rate (Once per two years won’t let me achieve Mountain Goat status). I am considering working Mt Stromlo, or Mt Ainslie next. That way, I can take a chair, and spend time working out how to maximise the benefit from doing this work

Thanks to the people who were able to answer my call on 7Mhz, VK2SR (Chris), VK7LH (Ross), VK1FJMG (John), and VK1MA (Matt). You allowed me to activate the summit.

In all, while getting there was bloody hard work, being there was awesome. And that in the end is what it is about.