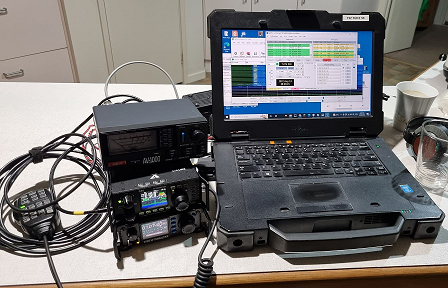 One of the delights with having multiple portable HF radios is the capacity to use different specific features that suit a particular radio over another. One particular radio that I like, is my Xiegu G90, which is a HF SDR transceiver that outputs up to 20W, and includes a nice little auto tuner built in. It has USB support for rig control. Its small size is a boom to field operations.

One of the abject frustrations I have is that Every.Single.Radio I own doesn’t do data correctly. They all have fiddly radio -> computer interfaces, always involving multiple cables (excluding my IC27200 in the shack), and when I am in the field, it is so easy to lose track of that single cable that seemed insignificant in the workshop.

So I decided to do a trip to the local Jaycar Electronics shop, and see if they have nice loom tubing to allow me to tidy up the radio/computer interface. Not all of us have access to nice military radios any more that simply have plug-it-in capabilities without using a million interface boxes, so we make do with the commercial alternatives.

A quick trip later, Iand I had secured some self closing braided wire wrap (13mm Dia. – WH5634) and some glue lined heatshrink. Using the braided wire wrap meant that the cables would be secured together in a neat bundle – and a bit of work with a cable labeler ensures that the functions of the connectors is identified. I ended up using a cheap Audio interface dongle, as I could not get the laptop to believe that the headphone connector was also delivering audio – That is a battle for later

The details of the cable are pretty simple to locate on the Internet – Rig control is performed using a USB/TTL cable terminated using a 3.5mm plug – The plug is labeled ‘CTRL’ to remind me that it goes into the control head, not the back of the radio (That is an hour of my life I will never get back). Here is the pinout of the G90 TTL controller interface:

For completeness, here is a closeup of the controller connector:

The audio side is also very simply – I simply used a 8 pin Mini Din connector to a set of 3.5mm Plugs (one for audio out, and one for audio in). Here is the G90 AUX connector pinout.

I found that using WSJT-X was a bit of a pain- the rig control protocol would drop out occasionally when I transmitted. One reliable solution was to use Ham Radio Deluxe as the rig control software. Just set the rig type to HRD in the settings window. In HRD, set the radio to an Icom IC-7100 at 19200 baud and it works beautifully.

Remember to set the audio input on the G90 to the AUX connector by pressing ‘POW’ to display ‘Input’, then rotating the Main Tuning knob to select ‘Line’. Failure to remember this step will prevent your transmitted audio from making it out the radio. When you are finished, remember to set it back to Mic :-).

Anyhow – After a morning of making a simple cable and futzing around with a radio I connected it to a real antenna, and was instantly rewarded with FT-8 contacts.