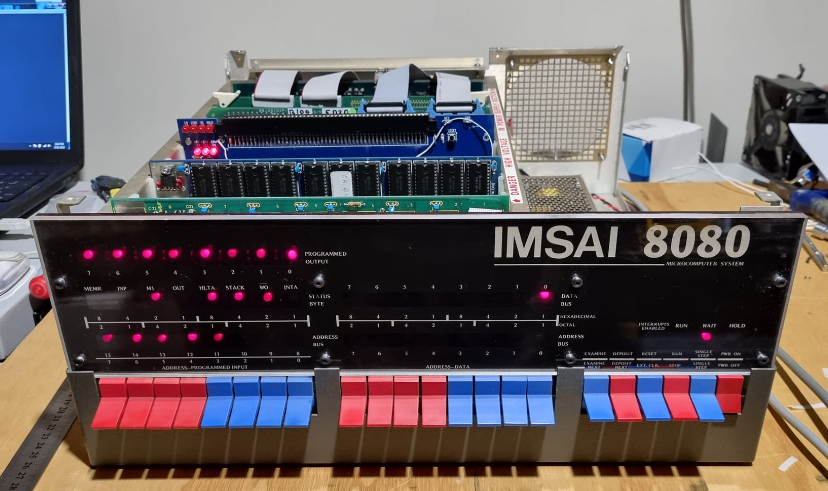 It’s been an epic week. I got my IMSAI S100 system running.

I replaced the 120v linear power supply with a couple of modern switchers – now the system is sooo much lighter, and I can plug it into a domestc 240v powerpoint without blowing the machine up.

I did cut a hole in the back of the machine for an IEC socket – Now I can use any power cable in the study!

This machine is largely made from boards I have made or collected over the years. It has a Z80 cpu based on a Northstar board and is sporting an epic 16K of RAM on a Salota S100 memory board.

The Salota memory board was particularly interesting. They mixed up CS* and OE* in the original design. A couple of hours with an Xacto knife and a heap of jumper wires and it was sorted.

It runs TinyBasic when it is copied into ram. It will not run the original Microsoft Basic, as the CPU card uses a Z-80, and the Microsoft basic makes 8080 based assumptions on the result of operations that set flags that are not exactly the same as with the Z-80.

I also have a 88-2SIO card that can also provide a monitor rom if required. When using this card, I don’t use the monitor rom in it when I use the the Northstar clone CPU.