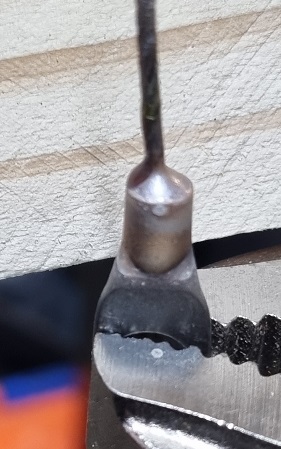 One of the commercial antennas I received during the Covid pandemic in 2020 used Stainless Steel wire as its radiating element. This material is solid, and won’t change dimension on me for a long long time. They brazed a terminal to the end of the wire, and it got me thinking.

How on earth do you do that – I thought Stainless was unable to be soldered or brazed – After a bit of research I discovered that I was very wrong.

It turns out that simple brazing, such as anybody can do with patience using a simple propane torch does the trick.

A quick trip to the Antenna Construction Domain of the Gods (Bunnings), and I had suitable brazing rods and flux, as well as a roll of 1.5mm stainless wire. The wire is inexpensive, at only $20 for the roll.

The flux is important – It is what protects the wire during heating by remove oxides from the base material and preventing oxidation during the heating process, thus promoting the free flow of the brazing filler metal. I used CA602 as a common flux suitable for silver, steel and stainless steel.

My ever trusty torch has been used for more jobs than I can imagine, ranging from brazing small pipes to starting the fire in the OzPig. I use a gas called TF Ultra as a MAPP gas replacement. MAPP gas was interesting, as it is a fuel gas based on a stabilized mixture of methylacetylene (propyne) and propadiene, but its manufacture was discontinued in 2008 because it was not economical to produce, and had the disadvantage that the high concentration of carbon in the flame changed the carbon content of any steel welded using the gas.

In Australia, Bunnings and BOC sells a gas called TF Ultra, which is made from Propylene and it is cheap and reliable and heats to 1982 Degrees C.

Next item that I had to think of was what brazing rod to use. I didn’t want to try using soft 60/40 solder, as I was concerned about it decomposing in the high heat, so I identified some 15% silver brazing rods at Bunnings that I believed would suit beautifully. Interestingly, the MSDS for the product that I just looked at suggested that I should have gone for 45% silver as it is suitable for stainless steel, but these rods worked. Your mileage may vary, and I will update this post in a couple of years when the antenna has been up in the elements.

This time, I used gentle head, and a heap of flux – The flux visibly started to bubble as it was working, and I found that the brazing rod flowed into the wire with relative ease.

The terminal that I used was simply a Jaycar solder lug. I clamped it in a set of vice grips, filled it with flux and gently heated it while heating the filler rod. Once everything got to the correct melting temperature, the flux did its job, and the brazing rod flowed into the terminal cup. Once everything was flowing, I gently inserted the wire into the end of the lug cup, waited for a couple of seconds under gentle heat and the filler formed a beautiful fillet into the wire.

And that was it – Done! I let if cool, and went running into the house with my newly formed joint and showed my ever patient partner.

Following that, I swaged a vinyl insulator onto the wire and swaged a closing loop on the other end of the wire. These swages are amazing – simply squeeze and the work is done. Of course you have to use a swaging tool, but they are not expensive and will last the rest of your life. Now, there is no load to be applied to the connection point 🙂