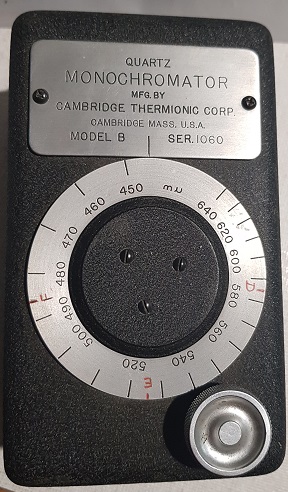 On the local amateur radio reflector recently there was an interesting discussion about a Monochromator which was being sold at the local auction place. I spent a bit of time working as a Technical Officer in the Chemistry lab at the Australian Defence Force Academy, so I had seen similar equipment being used for Gas Chromatography, so I decided to pick it up as they are beautiful pieces of optical measurement equipment.

As I suspected, it is an optical/mechanical system, based on clever use of mirrors and diffraction gratings, that allows you to focus on a specific wavelength of light from a source. A moveable component allows the diffraction grating to be moved relative to the incoming light source, allowing light only at the desired wavelength to exit the device.

A scale on the face allows the wavelength of light being passed through to be determined. The scale is measured in ‘mu’ meters (Milli Micro). We use the term nanometres now.

I used a cheap LED torch, which is predominantly white as the input light to see what the output looked like. 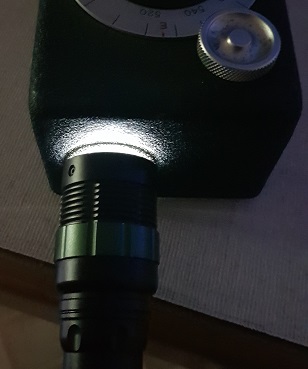 If you place a light meter on out output, you can measure the relative intensity of output vs wavelength, allowing one to plot the spectral output of the light source being measured.

An interesting feature of this particular device, is that it doesn’t pass the output through a single slit. This allows actual images to be examined at particular wavelengths. Using the power of a modern PC LCD screen couples with careful placement of a camera phone, you can see the image of the search bar of my laptop at the wavelength of 618nm.

In all, a fun little piece of test gear, for wavelengths far shorter than we would normally be playing at within the Amateur bands.

Why being non Vendor focused is important

Interconnectivity where it is not expected