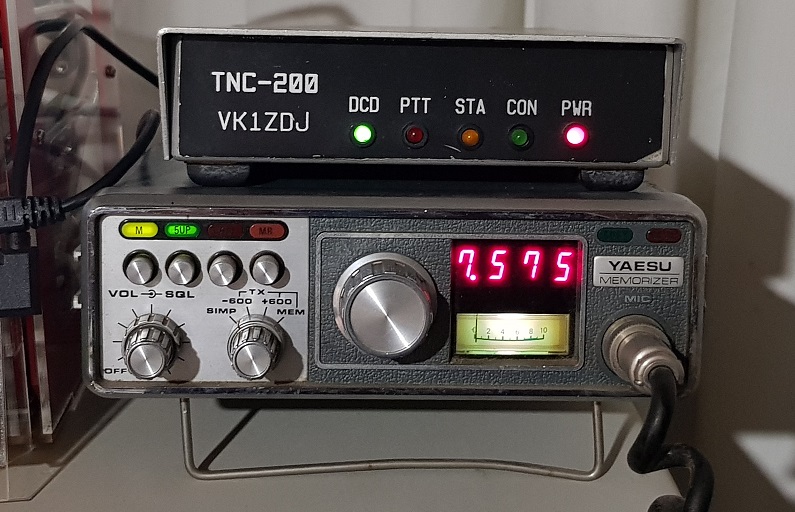 I was actively involved in packet radio here in Canberra in the 80’s and 90’s. Great stuff, and a ton of fun. We had a core group of probably 10 -15 people here who were active. I did mobile packet, using a TRS/80 model 100 as the terminal on the front seat of the car, connected to a TAPR TNC/2 and a Yaesu FT-227R Memoriser radio. In those days we didn’t have all of the fuss of the mobile phone brigade making road laws complex… Ahhhh Simpler times. (Wow we got away with anything…)

One interesting event….. I was working for the Patent office here in Canberra doing Token Ring network support, which largely involved responding to Lanview events letting us know about Token Ring Beacon alerts, running up the stairs to the appropriate floor, finding the workstation that had its plug kicked out of the wall, and plugging it back in, restoring connectivity to the entire office. I loved Broken Ring…. It was absolutely not suited to a network af 800 workstations in a single ring.

Anyhow, one lunchtime I was talking to the head of IT about how interconnected the world had becoming, and he was adamant that the offices mainframe would never be that interconnected, because it was a government computer…… (from memory we had a Facom M-380, just before we transitioned to an IBM Z series mainframe), so I decided I would show him the definition of mid 90’s Interconnection.

He and I sat in front of a 3270 display, and initiated a connection with the local Austpac Node on X.25, (In those days, X25 was how Government offices connected with the world) then I dialed into the Austpac/AARNET gateway.

I explained that we were now connected to a series of global university networks that allowed researchers to connect all round the panet, essentially the new fledgling Internet that we had avoided connecting to our office, because we didn’t need it yet. This was a bit of a surprise to him, but I needed to continue.

Next, I connected to an AMPR.org gateway we had installed at the ANU that allowed us to connect Canberra Packet Radio gear to worldwide AMPR nodes together via AARNET…. He was visibly stunned.

Finally, I did a 1200 baud telnet connection via Packet Radio on 147.575 Mhz with my AMPR gateway at home and logged into my server, doing a directory listing…………

He was flabbergasted… absolutely dumbfounded that I could connect the Patent Office mainframe to my home PC… That floored him completely.

A couple of years later, the Internet happened, and nobody was amazed anymore. Those were the days 🙂