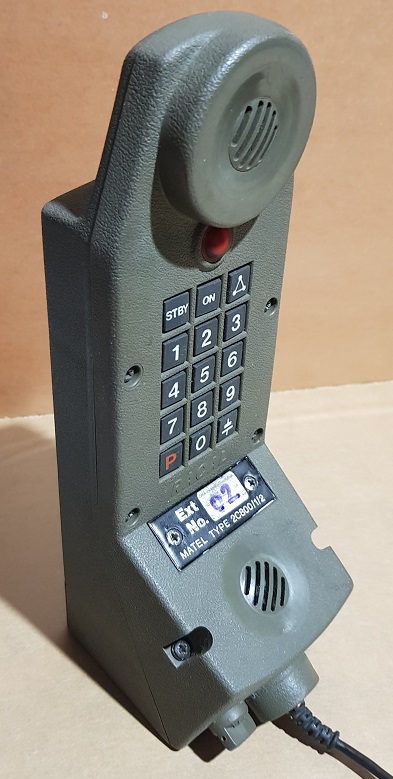 So, I was browsing the Internets a while ago, continuing my search for interesting ex military radio gear, and I encountered these awesome Racal Matel Field Phones.

There were a couple of people selling them, so I picked one up for about 20 UK Pounds, and waited for it to arrive from the UK.

Fast forward just a little bit, and it arrived – safe and sound from the shipping process, and I immediately took it apart. Inside, it is a complex piece of gear – Based on a RCA1802 Microprocessor, as well as a complex PLL based RF board. I connected it to a CRO and saw a weird set of waveforms at a couple of hundred Khz, in bursts, suggesting it was looking for a friend across the wire. This was clearly no ordinary telephone.

An internet search for manuals of any description turned up a blank. Often, when that happens you can get information from a quick patent search. My search was patents owned by ‘Racal Acoustics’, the company name emblazoned on the back of the device. And there was significant success.

The most relevant patent that I could find is:

It turns out that these phones are designed to connect to a common cable that Racal called a ‘highway’. This let people deploy a modest number of phones in a distributed manner, while not requiring a centralised PABX or power system, which is ideal, if you spend your days in a series of green tents, surrounded by a lot of sand, and you need to communicate information that may have a certain… errr…. ‘timeliness’ associated with it…..

This is a block diagram for the phone from the patent. You can see that voice data is modulated onto a synthesised carrier and applied to a Line interface. Likewise, RF fed in from the line interface is amplified, mixed with the synthesiser frequency and demodulated. It is in reality a little radio……

Having discovered this, I definitely wanted some more phones to play with so this one could talk to some buddies. A quick trip to eBay, and I located some more in the UK – but the seller wouldn’t budge on sending the to Australia. Sigh…. A quick trip to a UK mailbox forwarder (MyUKMailbox), and the seller was then convinced that he was selling domestically, and in a short period more phones were on their way to Australia. Admittedly, the trip that they took was fascinating, UK, Germany, Russia, Japan, Australia, but they got here.

So – These phones are all assigned an extension number using a set of rotary switches under the type identification plate.

Each phone has to have a unique ID. This one is set to extension number 10. Additionally, they all have to be connected to a common interface cable, called a ‘Highway’. To achieve this, they have an interface box which is designed to connect to a two wire bus made from quite heavy wire (Field Phone Wire), which is comprised of multiple copper strands as well as steel strands for strength. The connector uses insulation displacement technology to allow the connection to be made without opening the cable.

I modified my connectors to allow me to use stranded speaker wire by adding a couple of banana jacks with thumb screws. I had to do this, as I couldn’t find a type of cable that the insulation displacement connection system mechanism would reliably connect with.

I hooked up a couple of phones to a long speaker cable and there was No success….. It turns out that the Highway cable has to be appropriately terminated but the patent does’t hint at what it should be. A web search found a site called PRC68.com that had some hints. The terminator is called a 2C803 and it contains electronics to stop transmission line reflections, which makes sense. Field wire is nominally a 600 ohm transmission line. It turns out that little information is publicly available, but the photos show a couple of 150 ohm resisters, and a 2.2uF cap as well as a couple of other caps and a 15K resistor. So I jury-rigged this terminator up and placed one on each end of the line. (yes, the resistors are 100 ohm, not 150)

IT WORKED!!! Each phone could call the other!

Now, there is much to discover…. The patent indicates that the microphone and earpiece can directly bypass the modulator and demodulator – so there must be a way to use these on other gear. This is probably indicated by the following photos that show the ‘highway connector’ of a 2C800/10/2 phone, which has a heap of electronics in it.

Additionally, the 2C800/10/2 has a three pin connector on the handset, that is probably designed for a headset.

In all, I am happy that I own these. They were state of the art from about 1985, and if they could talk, it would be fun chatting to them. They were probably in service from 1985 through to about 2015 or so as they are only starting to hit the second hand market. Remember, they were all about helping a large, mobile, logistics organisation deliver a product from a supplier to an end consumer…… But I digress.