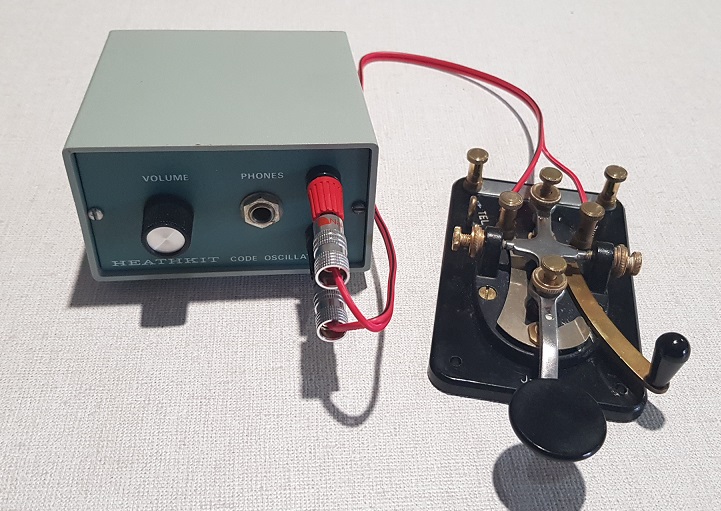 Today my Heathkit Code Practice Oscillator arrived. I was lucky enough to pick it up on eBay for a song, but the shipping took forever.

Anyway, it’s a beautifully constructed unit, built from a multivibrator circuit, based around two heathkit labeled 417-801 NPN transistors, and a class A amplifier using a 417-213 transistor.

All components were original from the early 70’s when the unit was originally constructed. One variable with Heathkit projects is that they were assembled by the purchaser, so the quality can be unknown – In this case, it was beautifully put together. Here are a couple of photos showing its construction.

Its fascinating when you look at this to realise that when these were first introduced in 1975, they sold for $9.95, including an inexpensive key and when they were advertised in 1990, they sold for $24.95. I believe that even at Jaycar prices, there is still more than $25 worth of parts here. Here is a photo from the 1979 Heathkit catalogue.

In the image above, there are unused terminals labeled ST and GND – These are across the key input, and can be used for direct connection to your station radio. An interesting aspect of these keyers is that a Single diode in the supply line allows it to support Grid Block Keying for valve based transmitters, up to a maximum of -400v. Just parallel the oscillator across the keying input to the radio, paying attention to the polarity of the key.

Headphone output simply connects the multivibrator output (Via the volume control) to the headphones, bypassing the output amplifier.

Sidetone frequency is adjusted by changing the value of R3, the 500K tone potentiometer. According to the Heathkit manual it is adjustable between 200 and 850Hz. When I tested mine, it comfortably went to 1.5Khz.

In all, it is a beautifully clean project, from an era when projects were beautiful and inexpensive.